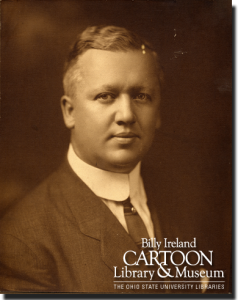 Who was Billy Ireland?

William Addison Ireland, known throughout his life as Billy, was born in Chillicothe, Ohio, on January 8, 1880.  Shortly after his graduation from high school, he was hired as a cartoonist by the Columbus Dispatch, where he drew editorial cartoons and spot illustrations.  “The Passing Show,” his commentary on current events, began weekly publication in 1908.   Ireland described himself as the janitor of “The Passing Show,” and his self-caricatures show a round little man in overalls.  He continued to create “The Passing Show” as well as four to seven editorial cartoons per week until his death in 1935.

Humor and his pen were Ireland’s weapons to target what he thought wrong or foolish and to endorse causes he believed in.   He was a tireless supporter of community improvements, an avid outdoorsman, a perceptive critic of political events, and a generous mentor.

To learn more about the life and career of one of Ohio’s most famous cartoonists, Lucy Shelton Caswell, Professor Emeritas and former curator of The Ohio State University Billy Ireland Cartoon Library & Museum, has written a book, Billy Ireland, which was published in 2007 and available for purchase.