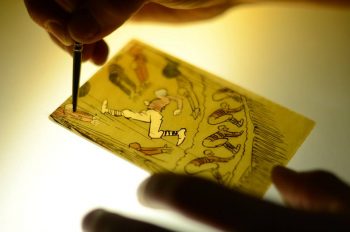 William Addison Ireland, known throughout his life as Billy, was born in Chillicothe, Ohio, on January 8, 1880. Shortly after his graduation from high school, he was hired as a cartoonist by the Columbus Dispatch, where he drew editorial cartoons and spot illustrations. “The Passing Show,” his commentary on current events, began weekly publication in 1908. Ireland described himself as the janitor of “The Passing Show,” and his self-caricatures show a round little man in overalls. He continued to create “The Passing Show” as well as four to seven editorial cartoons per week until his death in 1935.

Photo Gallery – The Making of the Billy Ireland Art Glass

A Tribute to Billy Ireland, which is located in the north lobby of Sullivant Hall, uses Billy Ireland’s cartoons to document highlights of his career. He was an early conservationist, ridiculed the resurgence of the Ku Klux Klan in central Ohio following World War I, and was an ardent supporter of The Ohio State University. One of his most important contributions to the Columbus community was his support over many years for the passage of bond issues to clean up and revitalize the east bank of the Scioto River, the area now known as the Scioto Mile. Ireland’s gentle humor stands the test of time.  Even though “Yes! We Have No Bananas” is no longer a hit song, most can identify with RCA’s Nipper about annoying music. 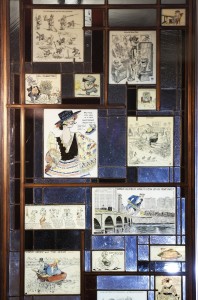 Wayne Cain
Daniel White
A Tribute to Billy Ireland
2013
Painted and stained glass, steel and bronze
35 in. x 111 in.

Dance:  A Tribute to Billy Ireland, which is located in the east lobby, features dance-related cartoons by Ireland. During Ireland’s lifetime, dance was important in the cultural life of the community and his work documents this. His personal enjoyment of dance is clearly reflected in the vigor of the work included in this art glass. Wayne Cain
Daniel White
Dance:  A Tribute to Billy Ireland
2013
Painted and stained glass, steel and bronze
56 in x 66 in.