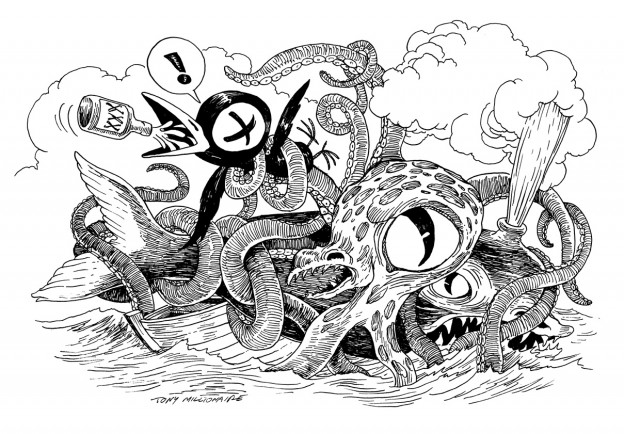 Please join us Thursday, September 4, 2014 at 7:00 PM as Mr. Tony Millionaire graces the stage at the Billy Ireland Cartoon Library & Museum’s Jean and Charles Schulz Lecture Hall (room 220,2nd floor) for a conversation with Caitlin McGurk about his eccentric life and cartooning legacy. There will also be a book signing following his presentation. This event is free and open to the public.

Tony Millionaire is the mad genius behind the long-running and frequently mispronounced syndicated comic strip Maakies, which began in 1994 in the New York Press. He is also the creator of a long list of all-ages graphic novels, including Billy Hazelnuts and the Sock Monkey series, which revolves around the beloved character Uncle Gabby and his adventures in an old seaside Victorian house with his stuffed compatriot Mr. Crow. Millionaire also created the Cartoon Network animated Adult Swim series, “The Drinky Crow Show,” based off his Maakies comic strips. Combining all of the mystery and beauty of the work of Johnny Gruelle (Raggedy Ann and Andy) with the macabre style of the 19th century penny dreadfuls, Millionaire has produced a prolific body of work that is as grotesque at times as it is poignant and romantic.

Tony Millionaire’s appearance is made possible by the generous help of the 2014 Cincinnati ComicCon, Northern Kentucky Convention Center, September 5-7, 2014.