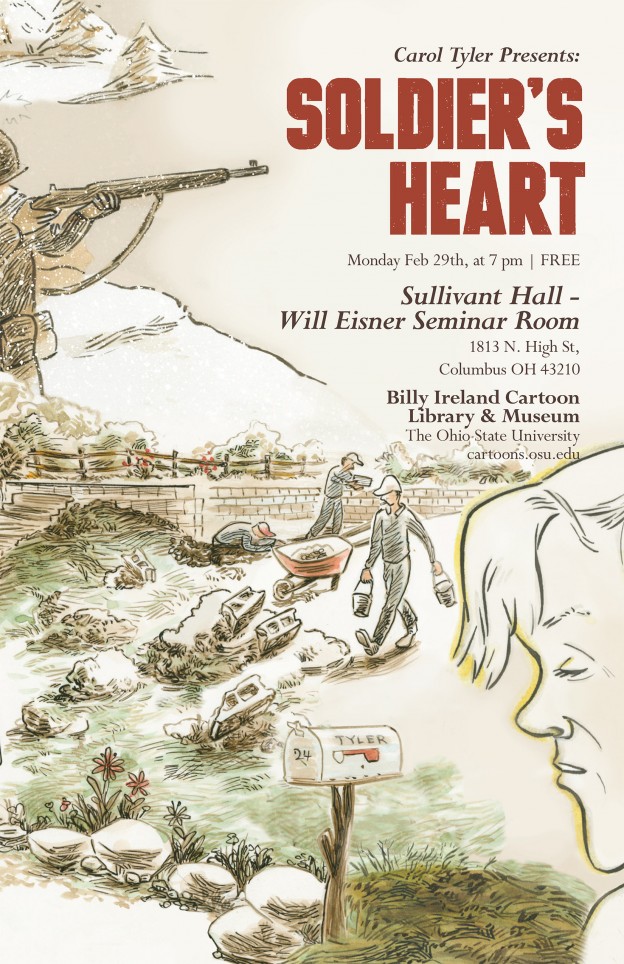 Carol Tyler will present “Comics to a ’T’: Time, Techniques, Trouble and new Territory” based on her new release SOLDIER’S HEART: The Campaign to Understand My WWII Veteran Father, A Daughter’s Memoir. The talk details the theme of PTSD and the techniques used to create a 364 page graphic novel. Ms. Tyler will also map out the unique challenges of autobiographical storytelling set in real time with real characters.

Soldier’s Heart is a sophisticated graphic masterpiece that explores the damaging effects of war and the toll it can take on families.

Many soldiers return home and never talk about what happened – especially those from the Greatest Generation. Thus was the case with S/Sgt. Charles W. Tyler, who late in life began to open up to his daughter Carol. By looking at him, you would never know that he was wounded in combat, but as she states at the beginning: “Not all scars are visible.”

The narrative unfolds over 360 pages of masterfully crafted drawings. Stunning ink and color washes weave through the decades: Tyler examines the past in sepia, confronts reality in stark black & white and uses rich color to convey the moods and fragility of the present. She overlays her father’s memories with her own, while struggling to understand her troubled life: a failed marriage, a teenage daughter on the edge, and an elderly father and mother. It’s literate, emotionally compelling, historically accurate, and took the artist a decade to complete. Winner of the Ohio Arts Council Excellence Award, nominated for 11 Eisners, 2 Harveys, 2 Ignatz awards, and named a finalist LA Times Book Prize, Soldier’s Heart is a magnificent achievement.

Books will be on sale after the event, and Carol will be available for signing.

This event is part of the national Will Eisner Week celebration. More info on WEW here: http://www.willeisnerweek.com/