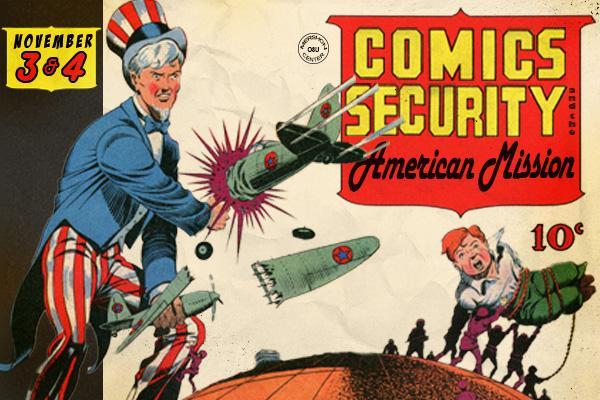 Comic heroes were born amidst the tumult of World War II and became pillars of the American century. They reflected the muscular interventionism central to postwar nationalism even as soapy personal dramas internalized an ambiguity toward war, empire, and domestic society felt by writers and their often youthful readership. These seemingly contradictory impulses have defined the comics medium, even as the ubiquity of pulp adventurism in contemporary media drives a new era of US-led cultural globalization. The conference will explore this history by bringing together nationally renowned specialists on foreign affairs and political messaging. It will ask how government priorities shaped four-color responses to global conflicts, and to what extent disruptive events like the Vietnam War challenged their ability to stand for truth, justice, and the American way? Did the late Cold War and 9/11 revive patriotic narratives? And how have multimedia adaptations handled the long evolution of iconic characters while addressing contemporary matters ranging from the War on Terror to new political divisions? These discussions will consider how comics and pulp adventures inform popular narratives of conflict, insecurity, and heroism, and what their long history reveals about cultural attitudes toward U.S. power.

Support provided by the Mershon Center for National Security, the Billy Ireland Cartoon Library and Museum, the History Department, and the East Asian Studies Center.