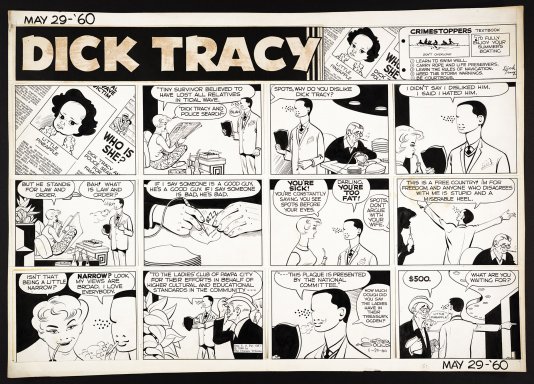 Take a look through cartoonist Daniel Clowes’s incredibly informed, sometimes surprising historical perspective. Ohio State’s Billy Ireland Cartoon Library & Museum is the world’s largest repository of cartoon art. To complement his survey concurrently on view, we invited Clowes—who, like many cartoonists, is a great student of his field’s history—to collaborate with the museum’s curators in presenting an exhibition of work by past greats whom he admires or considers influences. In works such as the comic book anthology series Eightball (1989–2004) and the graphic novel Wilson (2010), Clowes illustrates in a wide spectrum of styles that often incorporate, adapt, and comment on touchstones from comics history. Drawing from the museum’s collection, the work on view in this exhibition at the Wex illuminates Clowes’s range, encompassing Chester Gould’s hard-boiled detective strip Dick Tracy, the minimal elegance of Otto Soglow’s The Little King, the Art Nouveau–inspired fantasias of Winsor McCay’s Little Nemo in Slumberland, the action-adventure stories of Terry and the Pirates (created by Ohio State’s own Milton Caniff), and even the ever-popular Peanuts by Charles Schulz.

Organized by the Wexner Center for the Arts. Special thanks to Jenny Robb, Caitlin McGurk, and the staff at Ohio State’s Billy Ireland Cartoon Library & Museum for their generous assistance with this exhibition.

For gallery hours and more information visit, the Wexner Center for the Arts website.