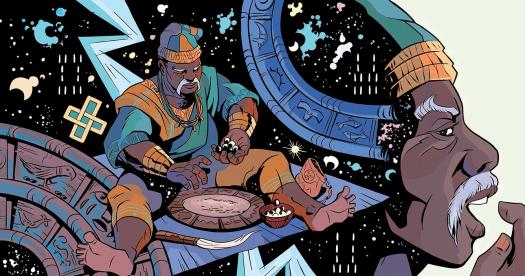 University Libraries’ International and Area Studies Global Comics Lecture Series, in partnership with the Center for Latin American Studies’ Afro-Brazilian Arts and Activism Lecture Series, presents an invited talk by Brazilian comics artist Hugo Canuto titled “The Making of Tales of the Orishas.” Hugo Canuto is an illustrator, comics author and architect. His works seeks to explore the relationship between art, culture and the mythology of Brazil and Latin America. He is the author of the Contos dos Orixás, a comic series adaptation of the epic stories of the Yorubá and their descendants. Contos dos Orixás is the winner of the Angelo Agostini award and nominated as a finalist for the Jabuti award in the Comic Book category. He is currently working on writing and illustrating A Canção de Mayrube and the second volume of the Contos dos Orixás series.

This event will offer English/Portuguese simultaneous translation, provided by Raquel Luciana de Souza and made possible by the Billy Ireland Cartoon Library & Museum.

The Global Comics Lecture Series is sponsored in part by The Ohio State University’s Center for Latin American Studies, Center for Slavic and East European Studies, East Asian Studies Center and International and Area Studies at University Libraries in conjunction with the Department of Spanish and Portuguese. The series is also supported by funds from the U.S. Department of Education Title VI grants.