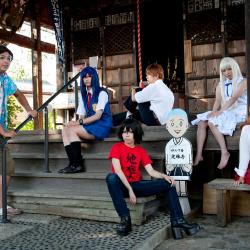 “Anime Pilgrimage” is a startling new spiritual phenomenon that is taking place throughout Japan. Visiting anime or comic book (manga) related places is called “pilgrimage to the holy land” (seichi junrei) among contemporary anime fans. For my talk, I am looking at how this new form of pilgrimage is developing in a traditional sacred area, Chichibu in Saitama prefecture. Chichibu, located northwest of Tokyo, has for centuries been the destination of pilgrims traveling on the thirty-four temple pilgrimage route dedicated to the bodhisattva Kannon. In recent years, however, Chichibu has attracted a new type of pilgrim due to the popularity of the hit 2011 TV anime, Ano hi mita hana no namae o bokutachi wa mada shiranai (literally, “We Still Don’t Know the Name of the Flower We Saw That Day”), the story of which takes place in Chichibu. What is anime pilgrimage? What makes it sacred? Why would fans travel to a place that forms the backdrop of a cartoon fantasy? What’s the anime about anyway? Pondering these questions about Ano hana as part of the broader phenomenon of anime pilgrimage leads to the important question of whether the “sacred” is alive and well in contemporary Japan.

Mark MacWilliams is currently a professor of East Asian Religions at St. Lawrence University in Canton, NY. His interests and publications are focused primarily on contemporary Japanese spirituality—particularly, pilgrimage in all its forms, the Internet and spiritual life, and Japanese manga (and anime). His work most recently has gone into a whole new fields—how Shinto has been defined in the modern period and anime pilgrimage in Japan. He also serves as Executive Editor for the journal, Religious Studies Review.