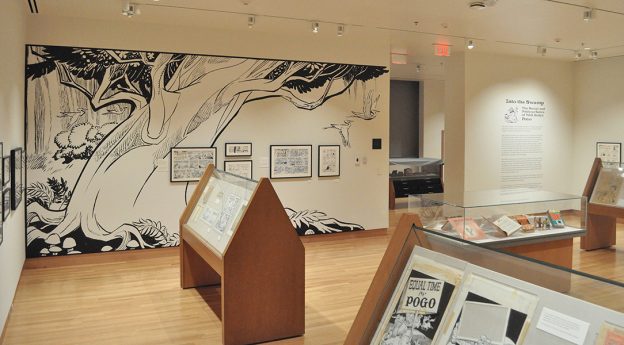 Join exhibit curators Jenny Robb and Lucy Shelton Caswell on Zoom for a virtual guided tour of the exhibit, Into the Swamp: The Social and Political Satire of Walt Kelly’s Pogo, on display at the Billy Ireland Cartoon Library & Museum until October 31, 2021.

Caswell and Robb explore Kelly’s career, his influences and his legacy, as well as his take on the many political issues of the world in which he lived: from the Red Scare, to the Cold War, to the environment, and presidential elections. Along the way, viewers will see a broad selection of Kelly’s artwork and will hear from special guests Jake Tapper, Lynn Johnston, Ben Sargent, Jeff Smith, Garry Trudeau, Jan Eliot, and Bill Watterson on their favorite aspects of Pogo, as well as how the strip influenced them. The premiere will be followed by a Q+A with the curators.

FREE and open to everyone!