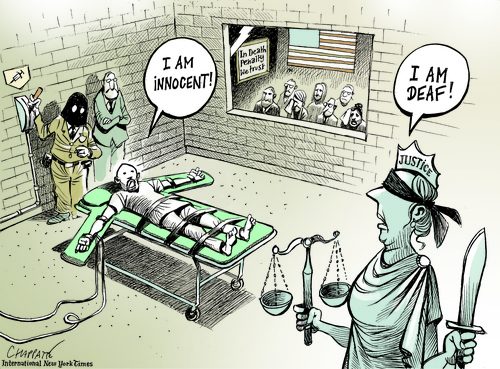 In Death Penalty We Trust by Patrick Chappatte

Windows on Death Row features over 70 works of art by famous American political cartoonists, as well as from a more unlikely source, death row inmates. Using art as a tool for social awareness, this exhibition opens a window into an often hidden part of the ongoing conversation about capital punishment – exploring the system through the eyes of the incarcerated. At a moment when our country is becoming ever more polarized regarding racial injustice and economic inequality, the questions that this exhibition raises could not be more timely. This traveling exhibit is presented by Patrick Chappatte, Anne-Frédérique Widmann, and Anne Hromadka.

Warning: Windows on Death Row contains content that may be inappropriate for children

Patrick Chappatte is an editorial cartoonist for The International New York Times and a pioneer of comics journalism in print, web and animation, Chappatte was named a Young Global Leader by the World Economic Forum in 2006. In 2011, he received the Thomas Nast Award from the New York Overseas Press Club of America. Chappatte was a research fellow at USC Annenberg School of Journalism from 2014 – 2015 and sits on the school’s Innovation Lab Advisory Board. He has given talks at the World Economic Forum in Davos, and the TED conference. The International New York Times has published six collections of his cartoons.

Promoting editorial cartooning as a tool for dialogue, and art as a way to facilitate conversations on human rights, Chappatte has mounted projects with editorial cartoonists in conflict-ridden countries over the last 10 years. Such initiatives, featuring workshops, exhibitions and debates, were organized in Serbia, Ivory Coast, Lebanon, Kenya and Guatemala with the support of the Swiss Federal Department of Foreign Affairs. He also co-founded the Geneva-based foundation “Cartooning for Peace” with Kofi Annan as honorary president, establishing an international prize to recognize cartoonists for their courage.

Anne-Frédérique Widmann is an investigative reporter, producer and documentary filmmaker for Swiss TV Broadcasting. In New York, she was the foreign correspondent for the Swiss daily Le Nouveau Quotidien and the newsmagazine L’Hebdo (1995-1998). She joined Swiss TV in 2003, where she became the co-producer, editor in chief, and anchor of the current affairs documentary program Temps Présent (a national equivalent of 60 Minutes). In 2010, she set up the investigative team for the Swiss TV and Radio Broadcasting Corp (RTS), which she led until 2014. Her last documentary, An Eye for an Eye: the Vengeance of the Gaddafi Clan (2014), was nominated for the Europa Prize and was a finalist of the Italia Prize. In 2010, she was awarded the Nicolas Bouvier Prize for best documentary for her work in Colombia, Diplomates suisses dans le piège colombien.

Anne Hromadka, Curator & Project Manager (U.S.) is an independent curator and arts management consultant. Recently, she founded AMH Art Advisory. Anne is working with a select group of artists, arts non-profits and commercial galleries to increase exposure and strategically develop their goals. Examples of her curatorial approach can be seen in several of her recent projects: Last summer, she co-curated an exhibition with Hirokazu Kosaka, Artistic Director at the Japanese American Culture & Community Center, as part of Voices of LA, a citywide festival bringing together diverse artists to celebrate LA’s rich, multicultural fabric. The exhibit entitled Veranda brought together nine Japanese and Jewish artists to explore shared cultural values and identity.

As the curator of Windows on Death Row, Hromadka worked closely with Chappatte and Widmann to develop the exhibition design, educational framework, and several interactive spaces to encourage dialogue and elicit responses from participants about this complicated and challenging topic.