The collection of the International Museum of Cartoon Art (IMCA) is moving to The Ohio State University Cartoon Research Library. The union of these two institutions will create the largest collection of original cartoon art in the world.

The IMCA was established in 1973 by Mort Walker, the creative force behind Beetle Bailey, as the first museum dedicated to collecting and exhibiting cartoons. IMCA’s collection consists of approximately 200,000 works, including original drawings from all genres of cartoon art (comic strips, comic books, animation, editorial, advertising, sport, caricature, greeting cards, graphic novels, and illustrations), display figures, toys and collectibles, and works on film and tape, CDs, and DVDs.

IMCA’s operating history spanned nearly thirty years. The museum originally opened in 1974 in a converted mansion in Greenwich, Connecticut. Two years later, the museum relocated to a renovated castle in Rye Brook, New York, where the collection was displayed until 1992. At that time, the city of Boca Raton, Florida invited the museum to construct a 52,000 square foot facility as part of an effort to attract cultural institutions to Palm Beach County. The museum was a very popular attraction with critically acclaimed exhibitions and events and programs for the public. Unfortunately, in 2002, after six years of highly successful operation and the expectation of a long and similarly successful future, the inability of several major donors to fulfill pledges forced the museum to close.

Lucy Shelton Caswell, professor and curator of the Cartoon Research Library, said, “We are honored that the IMCA’s board has placed its treasures in our care.” Efforts are underway to provide increased space for the Cartoon Research Library that will include museum-quality galleries. “It is critical that we have state-of-the-art gallery space to display IMCA’s collection appropriately,” notes Caswell. A gallery in the new facility will be named in honor of IMCA founder Mort Walker.

Joe Branin, Director of the Ohio State University Libraries, issued the following statement: “Special Collections, original manuscripts, photographs, and other rare or unique items so necessary for scholarship, are one of the critical identifiers of any research library. Universities point to their special collections as distinctive points of pride, those things that make their libraries unique. In receiving the collection of the International Museum of Cartoon Art, the Cartoon Research Library has substantially enhanced its standing as one of the premier research libraries. We are excited to make this outstanding collection available for scholarly study and for general appreciation in exhibits and other public programs.” 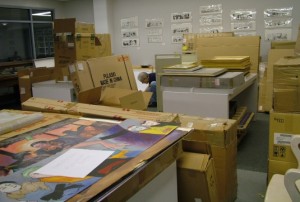 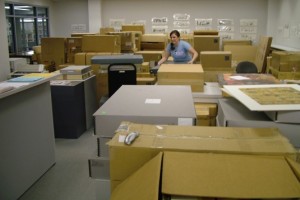 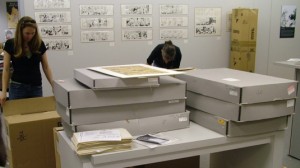