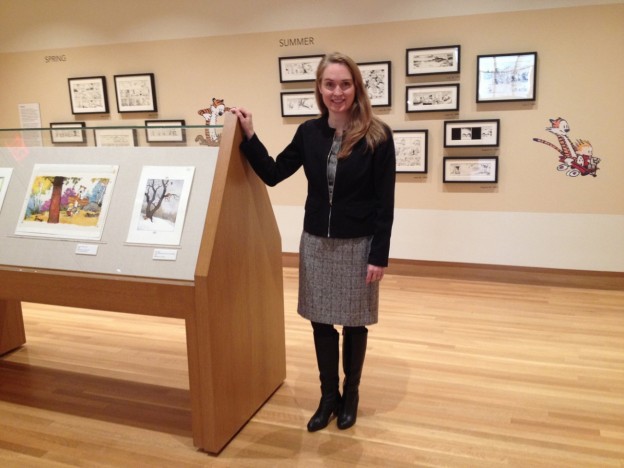 Two new exhibitions of original art by cartoonists Bill Watterson and Richard Thompson will delight fans of Calvin and Hobbes and Cul De Sac. The exhibitions open March 22 at the Billy Ireland Cartoon Library & Museum (BICLM) and will be on display through August 3, 2014. An opening reception on Friday, March 21 from 6 – 8 p.m. is free and open to the public. The companion shows provide a unique opportunity to see the original art of these two gifted cartoonists, who are friends and admirers of each other’s work.

Exploring Calvin and Hobbes revisits the beloved comic strip created by Watterson from 1985 to 1995. The exhibition will feature original Calvin and Hobbes dailies and Sundays as well as specialty pieces by Watterson from his collection of more than 3,000 originals housed at the BICLM. This is only the second exhibition devoted to Calvin and Hobbes, which appeared in 2,400 newspapers worldwide at the height of its popularity. Watterson won the National Cartoonists Society’s prestigious Reuben Award for “Outstanding Cartoonist of the Year” in both 1986 and 1988.

Six-year-old Calvin, named after the 16th-century theologian John Calvin, has a vivid imagination; an aversion to homework, chores, and girls; and a penchant for discussing the meaning of life. Hobbes, named for the 17th-century British philosopher Thomas Hobbes, appears to most of the strips’ characters as a stuffed animal, but from Calvin’s perspective, he is a living, breathing—sometimes even dangerous—tiger. He’s also a best friend, a playmate, a co-conspirator, and occasionally the voice of reason. The strip follows the two as they navigate the bumpy ride of life, surrounded by a supporting cast that includes Calvin’s parents, his neighbor Susie, his babysitter Rosalyn, the school bully Moe, and his teacher, Mrs. Wormwood.

The exhibition, curated by BICLM curator Jenny E. Robb, explores Watterson’s mastery of the comic strip art form through engaging characters, thoughtful writing, and creative layouts. It will also include original art by cartoonists who influenced Watterson, chosen by the artist from the BICLM’s collection, such as Charles Schulz, George Herriman, Jim Borgman, Berkeley Breathed, Garry Trudeau, and Ralph Steadman.

The 2010 winner of the Reuben Award for “Outstanding Cartoonist of the Year,” will be featured in the second exhibition, The Irresistible Force Meets the Immovable Object: A Richard Thompson Retrospective. This exhibit curated by Caitlin McGurk, will not only include gorgeously hand-watercolored Sunday originals and black-and-white dailies from Thompson’s popular comic strip Cul de Sac, but will celebrate his lesser-known abilities as a master of caricature, gags, and editorial cartoons— both as cartoonist and painter.

The six-year run of Cul De Sac serves as an insightful, humorous, and at times sentimental illustration of suburban family life on the outskirts of the city, and therefore a meditation on the tiny and sacred universe we form with our family outside of the rest of the world. The strip orbits around the activities of sibling child characters Alice and Petey Otterloop. In an interview with Mike Rhode in 2008, Thompson explained, “Let’s have a comic strip with kids, because comic strips are only this big now, so if you can fit somebody into it, it better be a kid. I thought the kids should be the opposite—a small child who’s the unstoppable force and the brother who’s the immovable object and the way they collide would make some humor.”

This sentiment has grown to have a double meaning, as Thompson had to discontinue the strip in September 2012 due to the advancement of his Parkinson’s disease. Thompson’s work continues to be celebrated in the upcoming release of The Complete Cul de Sac and The Art of Richard Thompson (both to be published by Andrews McMeel), the $100,000 that has been raised and donated to the Michael J. Fox Foundation in Richard’s name, and this exhibition, the most extensive display of his work to date.

About the Billy Ireland Cartoon Library & Museum: The BICLM is one of The Ohio State University Libraries’ special collections. Its primary mission is to develop a comprehensive research collection of materials documenting American printed cartoon art (editorial cartoons, comic strips, comic books, graphic novels, sports cartoons, and magazine cartoons) and to provide access to the collections. The BICLM recently moved into its newly-renovated 30,000 sq. ft. facility that includes a museum with three exhibition galleries, a reading room for researchers and a state-of-the-art collections storage space. The library reading room is open Monday-Friday 9 a.m. to 5 p.m. and Sunday 1 – 5 p.m. The museum is open Tuesday-Sunday from 1 – 5 p.m. See https://cartoons.osu.edu/ for further information.