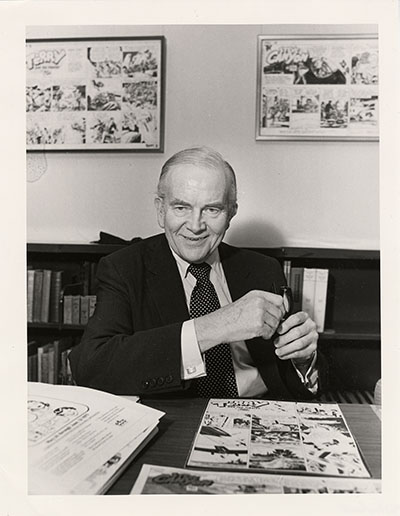 This exhibition celebrates the story of the library’s founding and its first decade of collecting, beginning with works from its original collections, the archives of Milton Caniff, creator of Terry and the Pirates and Steve Canyon and illustrator Jon Whitcomb. The tale continues with important national figures in the history of American cartoon art such as pioneering licensing agent Toni Mendez, and preeminent cartoonists Will Eisner, Edwina Dumm, and Walt Kelly, whose early donations helped to establish Ohio State University as the premier institutional collector of comics and cartoon art. The exhibit will also feature art and archival materials from OSU alumni, Ohio cartoonists, student cartoonists from The Lantern, and the Archives of the Association of American Editorial Cartoonists and the National Cartoonists Society.