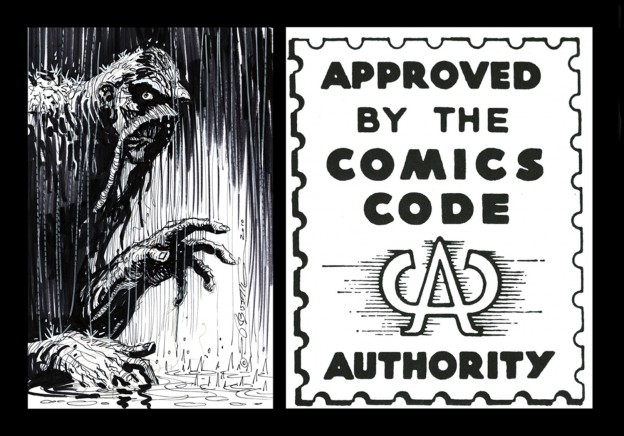 Veteran comics artist, writer, editor, publisher, and Center for Cartoon Studies instructor Stephen R. Bissette is perhaps best known for his landmark collaboration with writer Alan Moore and artists John Totleben and Rick Veitch on DC Comics’ Saga of the Swamp Thing (1983–87). Many credit that run as a catalyst to the demise of the Comics Code Authority (1954–2011), the mainstream comics industry’s self-regulatory institution formed in response to social, commercial, and Congressional pressure after the spring 1954 publication of Seduction of the Innocent by psychologist Dr. Fredric Wertham. On this 60th anniversary of Wertham’s book and the Comics Code’s initiation, Bissette reflects upon the controversy, launch, and impact of the Code and its eventual dismantling.

Additionally, we are thrilled to be making this announcement during the ongoing Will Eisner celebration this March, held annually in association with the Comic Book Legal Defense Fund, the fighters of free speech in comics.

This event is FREE for all audiences.

Add this event to your calendar.

Images courtesy of the artist.